To ensure sustainability of the network, the project adopted a tokenomic deflationary model.

A new blockchain project called Archethic has become the first project to burn 90% of their total token supply — within just 6 months of launch of their Mainnet Beta.

A simulation analysis comparing the token’s future supply with the existing circulating supply led to an unprecedented mass-burn of the $UCO token. This decision was taken to protect the project’s sustainability. Investor trust was affected by the simulation’s deviation from market standards.

“Our commitment, first and foremost, is to the self-sustenance of our network without compromising trust,”Sebastien dupont, Archethic’s CEO. “We have big goals of seeing this blockchain being real-world use, and we won’t risk anything which might compromise that.”

Archethic was left with a total of 1 billion $UCO coins after burning. This has been redistributed in order to maintain a deflationary tokenomic system. Deflationary cryptocurrency tokens, like Bitcoin, that are permanently scarce, have an indefinite supply. It is therefore immune from inflation that can affect fiat currencies that have been repeatedly issued by the issuing government.

Here’s a breakdown of the tokenomics.

Archethic’s new tokenomics ensures that there is a steady annual inflation rate between 10.93% and 2030. After which, inflation will drop to 0.5% until 2080. There will no longer be any tokens available at this time.

This is how the new token distribution works:

Network funding (38.2%).These funds include the current supply of 216M. The remaining money will be used for future blockchain development.

Adoption Reward (23.6%) Controlled by DAO, this wallet is dedicated to promote the use of the Archethic Public Blockchain (incentives for core & dapps developers, grants for new services and rewards for end users by using services).

Dynamic miner reward (3.34%). Supplements the transaction fees to pay fixed miner incentives until transactions fees > miners rewards. This pool aids the network during the bootstrap phase and leads to equilibrium or deflation.

Gamification & Geo Incentives (3.44%):It is used to recognize nodes that don’t belong on the network as well as reward participants who are connected to the network. Gamification is key to achieving these objectives.

Foundation (2.13%):To manage the decentralized governance of public blockchain, non-profit 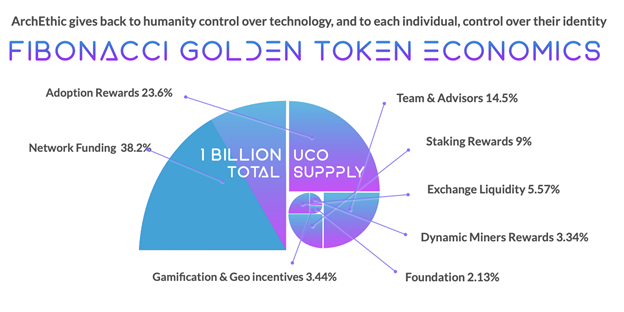 It is designed for everyday use

The Archethic blockchain is highly scalable and especially suited for use in industries like communications, marketplaces, retail,  that require scale, where most other blockchains struggle to find actual use cases. The unique consensus protocol ARCH (Atomic Rotating Content Heuristic) allows for up to 1,000,000 transactions per second. According to the team, it’s capable of mining Bitcoin’s current power and consuming only 3.6 billion more energy.

They plan to use the blockchain in industry applications because it allows for streamlined biometric Decentralized ID smart contracts that can be authenticated using fingerprint recognition. A smart contract is a contract with preset terms programmed to self-execute when run — Archethic has user identification smart contracts hard-coded into it. They back this capability with high safety standards on par with the aviation industry — the Archethic blockchain is capable of functioning without error even when up to 90% of its network is compromised by malicious actors.

“Archethic provides an ecosystem that is ready for various industry use-cases,” Nilesh Patankar, COO said. “During the bootstrap period, token inflation will be balanced by deployment of pervasive use-cases leading to mass adoption and hence token usage. The token economics designed now will maintain the fine balance between inflation, equilibrium and deflation.”

Additional benefits to the Archethic Blockchain

Archethic can be used in real-world applications for many other reasons. In addition to being the fastest, most secure and most environmentally-friendly blockchain, Archethic is also very programmer-friendly, cheap to use and ideal for use in NFT, communication, identity verification and other common applications.

Archethic’s smart contracts are being touted as the most advanced in the industry but also very easy to program with. These smart contracts are based upon the Unspent Transaction Output concept (UTXO), which is an abstraction of cryptocurrency that remains after every transaction. This ensures high accountability. Archethic’s network, biometrics and smart contract architecture is backed by 12 international patents.

The transaction fees will remain very low. They are set at 0.1% per transaction and controlled with lower and upper thresholds. Users won’t have to worry about running into ridiculously high transaction fees as the UCO token grows in market value, a significant problem that now stymies the Ethereum network.

NFT markets built using Archethic can manage royalty payments, access, and exploitation rights natively. The blockchain is specifically designed for modern applications and can make all related processes much more seamless than any other blockchains.

The blockchain is also suitable for custom-build applications such as Decentralized Web & Decentralized Mail. The team claims that it can provide the safest email solution, with data encrypted only once and no need to store it for multiple recipients.

The fingerprint DID also makes communication safer. Archethic’s biometric DID capabilities will also make it capable of providing instant, unforgeable identity authentication to institutions such as banks, universities and hospitals, or any other third party. DID works across international borders and is not subject to any privacy disclosure.

With Know-Your-Customer (KYC) protocols becoming more and more commonplace as the planet’s governments scramble to keep tabs on an ever-intermixing global economy, DID is set to become very important in the coming years. Archethic can address this increasing need directly.

Archethic Blockchain has unlimited potential and more than 25,000 UCO token holders are registered. It is rapidly growing and will deploy Archethic’s full network by 2022. ERC-20 tokens will then be able to move to Archethic. The team also plans to exponentially grow the number of token holders by then and attract tech and R&D talent to further grow its presence across the world.

With a talented and experienced team of tech professionals, R&D, marketers and business development personnel, Archethic seems poised to create a new generation of blockchain that is sustainable, scalable, secure and inclusive.