The Web3 Index, a site that monitors protocol usage throughout the Web3 stack, ranks Pocket Network and Livepeer among the most popular projects relative to others. Pocket Network, which has a 30-day revenue of more than 30x that of Arweave, is the current Number One middleware. Developer fees increased by 208% between November and December.

In the Web1.0 era, the transmission of information was one-way, without interaction on the user’s side. Web2.0 allowed users to access, edit and use information. However, privacy protection remained an issue, and the value of user participation wasn’t explored. Web3.0 broke large intermediary platforms’ monopoly that had resulted from Web2.0, transforming the platform-centered value distribution mode into one that allows each participant who creates value for the platform to have a share of the profit.

Web3.0 can’t be created in the vacuum.  Web3.0 applications cannot be developed in the air. The infrastructure for blockchain must be enhanced before they can be used on a larger scale. CryptogramVenture FoF (hereafter CGV foF) will focus on three different blockchain projects, Pocket Network and Arweave. The article also discusses Web3.0’s infrastructure from three perspectives: storage, API and streaming media.

Please note: This is an article on CGV FoF and it is intended as a reference. This article does not represent an investment proposal.

Pocket is a Web3-friendly distributed API infrastructure project. Pocket is a trusted API protocol, which can be used by all major blockchain networks.

The Pocket Project aims to create a distributed network of all blockchain nodes. Developers can access trustless API protocols to seamlessly connect with thousands of nodes and build a DAO ecosystem that includes cryptoeconomic incentives.

Ethereum experienced an almost four-and-a-half hour long outage on November 11, 2020. Infura was the API provider for Ethereum and IPFS. It stated that their Ethereum Mainnet API services were temporarily suspended, which led to these outage incidents. This outage is just one of several Single Points of Failures that can confuse centralized service providers.

CGV FoF has learnt that this incident did not affect users who added Pocket RPC’s Ethereum nodes to their wallets. The users could trade with DApps and smart contracts. The Pocket Network operator had a wide range of Ethereum clients which made the service flexible.

Michael O’Rourke, CEO and co-founder of Pocket Network, believes that centralized infrastructure providers must have a large number of available buffers to meet additional needs. Pocket Network’s decentralized structure means that it needs only to run a portion of its backup buffer. This reduces the cost of service. According to the company’s estimates, the Pocket Network services are “at least 10 times cheaper” than centralized services.

Pocket Network developed a unique economic model using its token, POKT. DAO is the basis of this model. This creates a trustless and decentralized bilateral market that allows nodes to trade with developers. All participants can benefit. Developers and nodes in Pocket ecology act as the strict demanders for POKT. 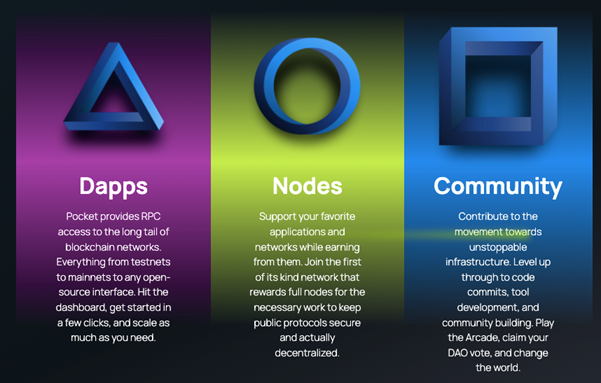 Bidding prices on both sides will vary because each market participant has its unique incentive system. DAO controls token policy and the burning mechanism will limit the total supply. DAO will decide the ultimate supply of POKT.

What makes POKT a more affordable solution than AWS bills? You can stake POKT to avoid paying AWS bills. Data will be cheaper as the nodes and relays increase in number. In the coming years, it is likely that each relay’s price will stabilize by a certain amount. 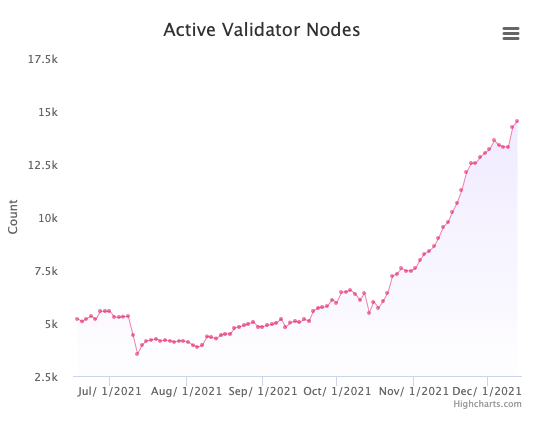 Although still in its early stages, it is growing at a rapid pace.

The new payment method by tokens could cause friction during adoption. We may be able to link various Web3 middleware systems with tokens if POKT is successful.

Algorand announced that it will improve interoperability through the integration of decentralized API infrastructure Pocket Network. It is also slated for cross-chain bridges.

Some of the most innovative blockchain projects, including SOLANA and Matic, have participated in pocket ecology. BlockSwap Network has adopted POKT along with Api3, Web3API (Fuse), and SKALE. See the image above.

Pocket Network has currently more than 20 employees working full time around the world, according to public information. As the co-founder & CEO, Michael P O’Rourke took the lead in creating Pocket Network in April 2017. In April 2017, he founded Pocket Network and was also the CEO of Nonce+1 Labs.

Arweave can be used as a storage method for NFT/Web3 projects. Blockweave is the decentralized storage network. It uses the Proof of Access consensus system to control the number of nodes that store data, ensuring balanced distribution.

Arweave changed the data structure in traditional blockchains. Each node does not need to keep all the blocks. However, each new block must be verified to confirm the validity of a random one. Blockweave uses this method. Arweave can be combined with Blockshadow, which permits nodes to rebuild a blockchain according the blockshadow as well as their transaction files. This allows for faster consensus and TPS.

Arweave’s token is called AR. AR tokens total 66,000,000. They are distributed in the following manner: 13% for funding, 31.4% to the team, 7.1%, 7.1%, strategic cooperation, 2.9%, consultant, 19.1%, ecological construction and 26.5% reserved. Part of ecological construction’s purpose is to encourage and reward storage suppliers, to facilitate orders and provide storage services to users. It also helps maintain the network nodes. The total number of block award tokens is 11,000,000.

The tokens that are obtained from storage service providers make up only a fraction of revenue at present. Arweave created Proof of Access (POA), a consensus system that requires storage providers to validate historical blocks in order to receive rewards. A storage supplier who has saved more blocks is more likely to be eligible for block reward.

The most important tracks in the Arweave ecosystem are finance, social networking, content distribution and verification. The ecology is in an early stage of construction. The following figure shows Arweave’s ecosystem. 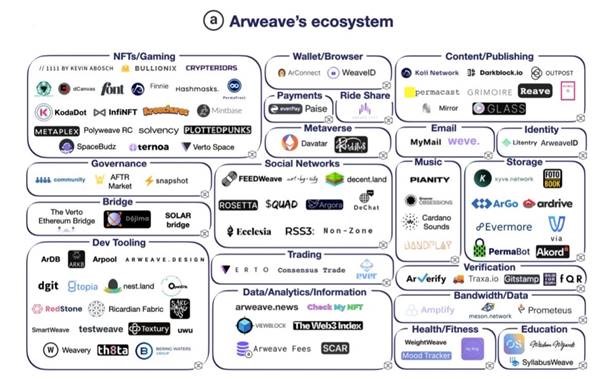 These institutions are keen to invest in storage. Arweave raised money from many well-known investors including high-ranking investment and financing institutions like a16z and Multicoin Capital as well as Union Square Ventures and Coinbase Ventures.

The streaming media layer uses Livepeer (LPT), which is a highly decentralized, and highly-scalable protocol. Creators of content can share live video and earn tokens (LPT), through transcoding. Livepeer functions as a media layer for the Web3 stack.

Transcoding involves reformatting the video file so that you have the best possible viewing experience. Anybody can join Livepeer to become an orchestrator. This software allows them access their CPU, GPU and bandwidth and help transcode and distribute video for paid broadcasters or developers. These orchestrators are paid fees via a cryptocurrency such as ETH, or a stablecoin tied to the US dollars.

More than 80% is consumed by live video streaming. Developers and startups will find it costly to use traditional video infrastructure in order to create a new streaming service. Transcoding is one of the biggest cost drivers for streaming media applications. Alicloud is an example. The average transcoding price for HD Live Video Streaming can be as high as US$6.2 an hour.

Livepeer’s native functional token is LPT. Users can contribute their computing resources to the network through a proprietary “transcoder”. Livepeer network will assign tasks to the user’s GPU. Once transcoding is complete, tokens of LPT will be awarded to the users.

By staking LPT tokens, users are able to earn an income and vote for their orchestrators. Each round of consensus will pick the top group of musicians to be assigned task execution. The orchestrators will receive a number of new tokens. The staked tokens that were voted in favor of the orchestrator are deducted if the orchestrator is found guilty. 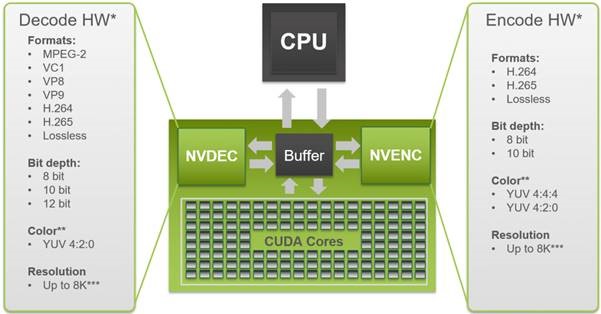 According to the data CGV FoF finds on Livepeer’s official website, the total number of active nodes has exceeded 100, the total fees earned are around US$322,000, and the total minutes of transcoded video are 8..4 million. The capacity on Livepeer’s network represents access to 70,000+ GPUs, or enough to encode all the realtime video streaming through Twitch, Facebook, and Youtube combined. 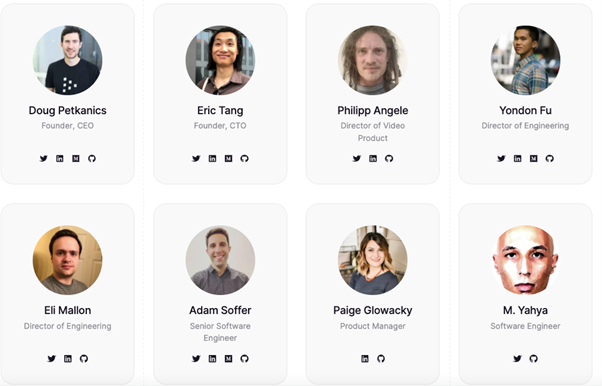 Livepeer has 22 employees listed on its official website. As a project that made its “debut” in 2017, its main team members have rich experience in blockchain and successful entrepreneurship, as well as strong technical background. CEO Doug Petkanics graduated from the University of Pennsylvania with a bachelor’s degree in CS, and CTO Eric Tang graduated from Carnegie Mellon University with a bachelor’s degree in CS. Together, they co-founded Wildcard Mobile Publishing Platform.

Web3.0 was established as the future direction of human innovation. Web3.0 is now in its infancy. We feel both the positive and negative effects of the digital and physical worlds.

Pocket Network entered an enormous and highly active emerging market. Because it provides trustless API protocol, and infrastructure for relay networks, Pocket Network is an essential solution to Web3.0 infrastructure. It will make it possible to reduce the cost of developing applications.

The key area of investment for all parties has been storage. As such, decentralized storage will be more significant. The future performance and potential success of data storage networks like Arweave on the vast, promising territory of 3.0 will be worth watching.

Livepeer’s video infrastructure solution will encourage the creation of an ecosystem that is economically more feasible than centralized streaming.

As Web3 markets mature and grow, the value of decentralized infrastructure will increase, and this will change fundamentally the way users interact with the Internet.

Please note: This is an article on CGV FoF and it is intended as a reference. This article does not represent an investment proposal.

The CGV FoFCGV FoF, an Asia-based Fund of Funds is a Fund of Funds that invests in Crypto Fund or Crypto Studio. CGV FoF is composed of family funds from Japan, Korea, and China’s mainland and Taiwan, with headquarters in Japan and branches in Singapore and Canada.