As the government of Kazakhstan claims the country’s power services are stabilizing, thus the Bitcoin hashrate could be on its way to recovery. But is it stable enough to allow Bitcoin mining? It will be stable.

A few days after Bitcoin’s hashrate hit an All Time High and was thus recovering from China’s ban on crypto mining. Another authoritarian crisis struck the Bitcoin mining industry in Kazakhstan. It caused the hash rate to plummet 15% in just 10 days.

The country has been the second-largest bitcoin mining spot (after the U.S.) with 18% of the global BTC hashrate ever since China’s miners were forced to find new locations with cheap energy costs.

Parallel to the crypto market down movement, on Friday 7th the price of BTC dropped to $41,000 while the coin’s mining in Kazakhstan went dark as the government forced a power and internet shutdown to gain control over raising protests, which had turned violent.

The news has been reported everywhere without complete certainty of what’s happening. Borders, the internet, and other means of communication were blocked, so the information doesn’t reach the world so easily.

The latest reports had shown that the uprising has been tamed as Russia’s President Putin stood proudly as the military ally who sent paratroopers last week. Demonstrating power by force

President Kassym-Jomart Tokayev called it “an attempted coup d’etat”, Reuters reported. He alleged that “It became clear that the main goal was to undermine the constitutional order and to seize power.”

Both countries had referred to the uprising as a foreign-backed insurrection, failing to blame someone –or somewhere– in specific.

“Old man out!” was the protestors’ favorite chant referring to the former Nazarbayev who still holds power.

“We are ordinary people. “We aren’t terrorists!”!” read a banner from 40 activists.

| Is Kazakhstan Turmoil a Reason for Another Bitcoin Hash Crash

Is the Crisis over?

The crisis itself is still ongoing. Although violence may have subsided, it is possible to stop.

“The violence has been by far the worst seen in the country since independence from the Soviet Union in 1991.” The Telegraph reported

“One man who had ventured out to find food was shot dead, according to credible reports, and a Kazakh media group said that one of its drivers had been killed.”

It wasn’t simply an internet shutdown: they was no way to buy food, banks were closed in central Almaty, going out was too dangerous, even ambulances were too afraid to work past the 7 pm curfew.

It also wasn’t simply about a rise in fuel prices, as the UK-based newspaper reported, the citizen’s despair also comes from “frustration at economic stagnation, revulsion at elite corruption and anger at the dilapidated state of social services and healthcare despite Kazakhstan’s oil and mineral wealth”.

The National Security Committee of Kazakhstan claimed that the situation has “stabilized and is under control” and declared the date as a day of mourning.

Others report however that protests continue into week 2. 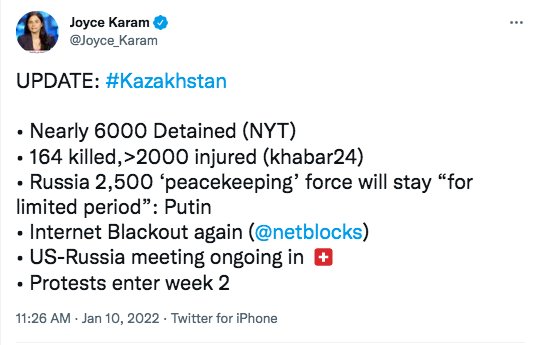 On the miners’ end, the government intends to tighten rules and introduce extra taxes starting this year.

Reports are mixed about how these events will impact the industry at the moment.

Analyse by CoinDeskBased on data from BTC.com, it was found that Bitcoin hashrate lost by top mining pools could be almost recovered. The loss is now 2.2%

The portal reported Alan Dordzhiev, head of the Kazakh National Association of Blockchain and Data Center Industry, had told them that the situation had been “almost resolved” and despite the blackouts, crypto mining regions were “totally fine”.

But, the internet watchdog NetBlocksReports indicate that there was a new blackout. 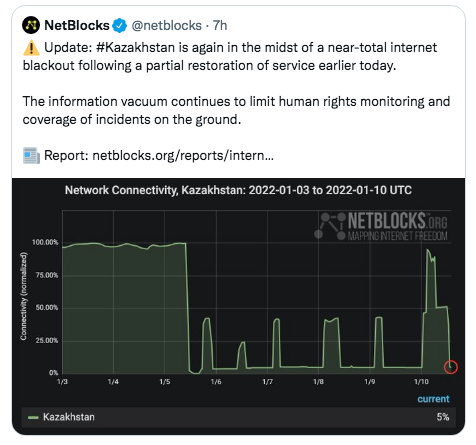 Und NetBlocks’Isik Mater, director of research for internet monitor said Forkast that restorations made in the country “are limited, unpredictable and don’t satisfy the requirement for a stable connectivity needed for cryptocurrency mining or blockchain applications,”

The current hashrate measured by Blockchain.com reads 176 EH/s, still away from the 208 million EH/s ATH on January 1st –but not endangering. 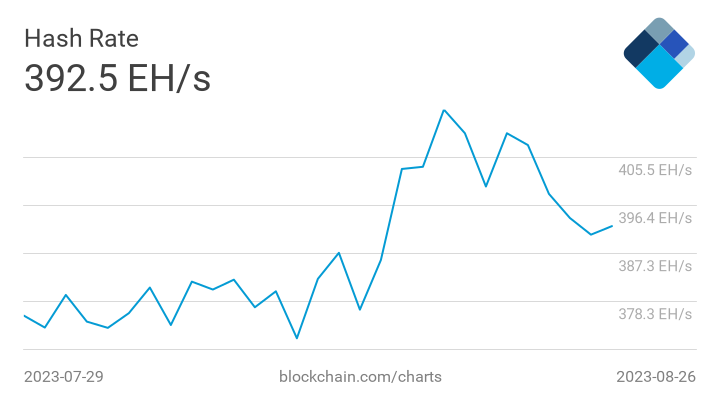 The power limitations faced by Kazakhstani miners were a problem. They might have already started to set their sight overseas, and beyond the service’s stability, the ongoing situation is unlikely to make them feel safe and welcomed.

| Bitcoin Hashrate Approaches New ATH, What Does It Mean For The Price?