2021 is the year of DeFi. NFTs. Metaverse and GameFi. This trend uses blockchain technology to give users new experiences. These trends can combine to create billion-dollar businesses and bring them into the digital age.

Axie Infinity, the original game that broke into mainstream gaming, introduced an innovative system that rewards players for their creativity, time and effort. This is called Play-To-Earn or P2E.

NFTs and Metaverse integration are two of the many projects that have focused on the game’s popularity. To that end, we spoke to the Elemental Knights team who recently released GensoKishi which is a GameFi-based play-to-earn model and a game-to-win system that will overhaul its mechanics as well as the user experience.

GensoKishi, which is available on Switch, PlayStation 4 and Android, represents the first step in a digital ecosystem that supports the blockchain. It also represents a revolutionary revolution that can bring Web3’s progress into the hands and control of people. They told us this.

One of the most ambitious concepts in the blockchain industry is the Metaverse. What is the secret to being so far ahead of this trend?

It is indeed difficult and time-consuming to create metaverses, just as you stated. For us, GENSOKISHI ONLINE -META WORLD-, is based on a 13 year old game titled as “Elemental Knights” and has accumulated 8 million downloads. It won the “Game Star Award Taiwan” in 2012 and we have 25k active monthly users. It receives in-game messages 80,000 times per day.

We think we’ve gotten this far because we provide so much freedom for our users. It is an MMORPG, so players can tag-team to complete missions or find rare items. There are many continents and worlds that players can explore. As you can see, this is the core of our metaverse. The communities=users will then be used to create a metaverse using GameFi/P2E and NFT. We’re ready.

Is token value affected by the in-game economy or user retention? What are your options to address this problem?

Like I said, we have 13 years of experience in user branding and community building. We’d like to invite all users including the old fans and new coming users from the crypto world. GENSOKISHI will use two tokens. GENSOKISHI keeps the governance token (MV), valuable, and the price-controlling of in-game cryptocurrency: ROND important. We keep the “economics” ecosystem running well in the game just like in real world to keep it steady. Our users can enjoy any other than the RPG adventure in GENSOKISHI. How soon will you sell LAND? What is Land?

We are grateful for the question. We announced that the LAND, which is part of the GENSOKISHI MAP, can only be obtained if there are enough MV tokens staked through an auction. You can do whatever you like on a LAND. It can be used to advertise your company or build your own castle. If they wish to obtain your NFTs, they will need to purchase a ROND token to gain access to your LAND. It will be the owners’ space so everything is possible.

Can you tell us more about what ‘UGC to earn’ means?

Per the words User Generated Content, UGC is an object such as weapons/items/equipment or NPC (Non Player Characters) that users with some MV token staked could have the rights to build on their own. This could be a new way to play a GameFi-based game. The UGC could be used to play the game, or you can make the UGC more valuable by selling it on NFT markets. You can also use this P2E (Play to Earn!) style of GENSOKISHI.

Is there IP? Are major corporations entering the UGC market?

Just answer your questions and you will get a YES! 😀

In Elemental Knights we had IP collaboration. It is the most lucrative and interesting model. 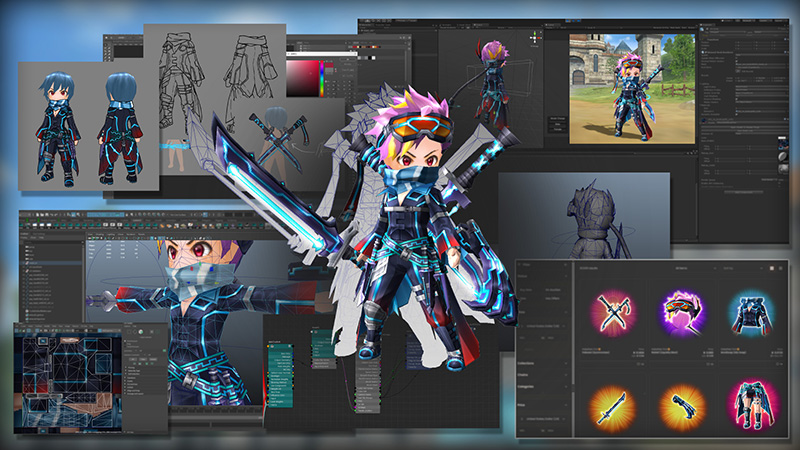 We would love to have more information about this game.

First of all, it’s a free to play game. You can instantly start playing by registering with your social media accounts. To play, you don’t have to know anything about cryptography or Metamask.

It is the QUALITY. The foundation is already there so we aren’t starting over. In order to achieve the quality standards we are familiar with, it would be necessary for us to spend at least $30,000,000 in five years.

Like I already said: Game design is exceptional. When we refer to users being able to generate their own content, we mean that. The freedom and detail in which you can generate content is what we’ve reached after these years of brushing up Elemental Knights.

Tag with friends around the globe, defeat super monsters, and then put it up for sale. There are many other worlds that users can explore to discover the treasure (NF), or to seek out LAND in order to own it. Furthermore, as a metaverse project, it’s a free world. It’s possible to make new friends, enjoy and create new events.

What value does the MV token bring to its owners? Can you tell a bit about it’s design?

The MV token is the governance token that we use on the Polygon network. To create their unique items, characters and worlds, users will have to invest a minimum amount of tokens. As we’re making this game into a DAO, voting rights will be given to holders as well to decide in-game policies and the game’s ultimate future. To earn ROND, you can stake the game.

Why chose the Polygon Network to build your game upon?

Polygon has another GameFi that I enjoy, and it is also a great option for me: speed and low gas fees. Nowadays ETH is the most popular blockchain but with the high gas fee it’s not suitable for gaming. People still trade on Ethereum, and Polygon solved the problems of our GameFi Team by being L2 of ETH. Also Polygon has the most active users on the market, so that’s the main reason we choose Polygon as our partner. We also had an official partnership with Polygon Studio.

How do you see your future?

We are grateful for the question. First I want to share that we are going to have TrustPad as a launchpad platform partner running IDO in Jan/2022,  and also we’ll be releasing the 1st SUPER RARE NFT auction. We aim to list MV tokens on some CEX/DEX in order to increase liquidity and awareness. Also for the UGC feature and LAND auction we’ll be releasing after the official launch in Aug/2022 but if possible would like to make it happen even earlier.

For global users we’re working hard on everything that Elemental Knights never did. This would be great and I’d love for you to join me.

Please elaborate on the relationship between TrustPad and DefF’s launchpad association.

Thank you so much for this partnership. Trustpad had a wonderful conversation and was willing to assist GENSOKISHI in increasing awareness of the EU/UK with their powerful Defi launchpad organization. This association is supported by many DeFi/GameFi platforms. It is a wonderful partnership that I had never imagined, but it has been a huge help to me. The project is in our hands and we will work hard. Love.

Are there any other things the community ought to be aware of?

GENSOKISHI ONLINE -META WORLD-‘s Whitelist Lottery, which ran until December 19, was a huge success with over 100K entries.

GENSOKISHI announces a second Whitelist Lottery with an estimated value of $10,000 as a gesture to thank TrustPad for their partnership.